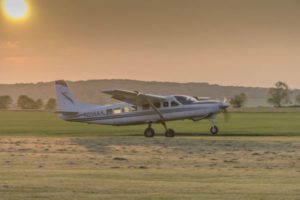 Jump Pilot. It’s not exactly the job title most pilots look for when entering aviation. Indeed, most pilots who find themselves spending any time dropping jumpers usually only do so on their way to bigger things. But for some, it’s not only the most exciting, challenging & rewarding flying they’ve done, it’s the top of the pyramid.

Nowhere else in flying does a pilot have to learn to deal with a shifting load of crazy jumpers, but passengers who leave halfway through the trip—all while making sure passengers exit in exactly the right spot, at exactly the right altitude & at the perfect speed every single time. Add to that the need to read & understand the effect of winds for jumpers both in freefall & under canopy, then toss in having to land an aircraft literally thousands of times a year, & you end up with a skill set unique to jump pilots. It’s a type of precision flying that isn’t easily understood or mastered. Yet like most pilots, I was lea to believe that flying jumpers was not a goal, but rather a steppingstone to a more fulfilling career, & so I moved on to bigger & better things.